Would you like to switch to the accessible version of this site?

Don't need the accessible version of this site?

The Webster Technique, takes it one step further. Dr. Larry Webster developed a chiropractic technique that balances the pelvis properly, while also reducing the stress to the ligaments that support the uterus, more specifically the round ligaments. Dr. Webster developed this technique after watching his own daughter suffer through a long, painful labor with a baby in the breech position.

The round ligaments act to hold the uterus in suspension within the abdomen. However, as the pregnancy goes on, these round ligaments can become thin and tight like a rubber band pulled to tension, causing sharp, spastic pains and restricting the space in which the baby has to maneuver within the womb. Restriction of this movement often causes a baby to stay in a breech position beyond 37 weeks. This can be a very disconcerting feeling to many women, as we know from firsthand experience. Once the pelvis and sacrum are properly aligned, the Webster Technique focuses on relieving the tightness in the round ligaments. This allows the baby to shift comfortably and freely within the womb so that he or she may get into proper position for his or her big journey to the outside world.

And with all the fears the mainstream media, hospitals, AMA, and insurance companies have instilled in our society about childbirth, you need a stacked deck to stare down those fears with full faith and confidence in yourself, your body, and your baby.

Why Should I Have Chiropractic Care During Pregnancy?

During pregnancy, there are several physiological and endocrinological changes that occur in preparation for creating the environment for the developing baby. The following changes could result in a misaligned spine or joints:

Establishing pelvic balance and alignment is another reason to obtain chiropractic care during pregnancy. When the pelvis is misaligned it may reduce the amount of room available for the developing baby. This restriction is called intrauterine constraint. A misaligned pelvis may also make it difficult for the baby to get into the best possible position for delivery. This can affect the mother’s ability to have a natural, non-invasive birth. Breech and posterior positions can interfere with the natural ease of labor and lead to interventions such as c-sections.

The nervous system is the master communication system to all the body systems including the reproductive system. Keeping the spine aligned helps the entire body work more effectively.

What Are The Benefits Of Chiropractic Care During Pregnancy?

What About Chiropractic Care And Breech Deliveries?

The late Larry Webster, D.C., Founder of the International Chiropractic Pediatric Association(ICPA), developed a specific chiropractic analysis and adjustment which enables chiropractors to establish balance in the pregnant woman’s pelvis and reduce undue stress to her uterus and supporting ligaments. This balanced state in the pelvis has been clinically shown to allow for optimal fetal positioning. The technique is known as the Webster Technique.

It is considered normal by some for a baby to present breech until the third trimester. Most birth practitioners are not concerned with breech presentations until a patient is 37 weeks along. Approximately 4% of all pregnancies result in a breech presentation.

The Journal of Manipulative and Physiological Therapeutics reported in the July/August 2002 issue an 82% success rate of babies turning vertex when doctors of chiropractic used the Webster Technique. Further, the results from the study suggest that it may be beneficial to perform the Webster Technique as soon as the 8th month of pregnancy when a woman has a breech presentation.

Currently, the International Chiropractic Pediatric Association (ICPA) recommends that women receive chiropractic care throughout pregnancy to establish pelvic balance and optimize the room a baby has for development throughout pregnancy. With a balanced pelvis, babies have a greater chance of moving into the correct position for birth, and the crisis and worry associated with breech and posterior presentations may be avoided altogether. Optimal baby positioning at the time of birth also eliminates the potential for dystocia (difficult labor) and therefore results in easier and safer deliveries for both the mother and baby.

How the Webster Technique Can Help You Birth Without Fear

For many women, pregnancy can be a very uncomfortable experience. First, there are the initial hormonal changes and morning sickness; the feeling of being on an emotional roller-coaster for no good reason whatsoever and the unusual food cravings at all hours of the day (such as early, early morning Jack-in-the-Box taco runs for those husbands keeping track).

Next come the physical changes. As the baby develops and grows inside the womb, so does the momma’s belly. This expansion of the belly is an unavoidable change, part of the territory that comes with growing a baby. But oftentimes, this territory is accompanied by an alteration in spinal and pelvic alignment. This structural alteration, or misalignment, is often very uncomfortable and even painful as the pregnancy progresses.

One of the hormones that runs wild through a pregnant momma’s body is relaxin. Relaxin helps ligaments loosen up, especially those in the pelvic area, to accomodate the expansion of the growing baby and uterus. However, relaxin can be a double-edged sword. While it helps those bones shift in order to make way for the baby, the ligament laxity can make those pelvic bones very unstable in their position, allowing them to misalign in a very painful way. Couple this with the fact that a pregnant woman’s lumbar spinal curvature can increase as the size and weight of the belly increase (a temporary, forced hyperlordosis so as to speak), and you have the recipe for a very painful, very unhappy pregnancy. Letting go of fears surrounding labor are hard to do when you are pregnant, in pain, and unhappy about it.

This is where Chiropractic comes into play.

In Chiropractic, the two most important parts of the spine to pay attention to, more than any other areas, are the very top and very bottom of the spine. At the top is the atlas, or C1 vertebra. Proper position of this vertebra is important because of its close proximity to the brain stem, as well as its ability to create a domino effect of spinal misalignment from the top all the way down to the bottom where the pelvis and sacrum are. Proper alignment of the atlas is paramount for a healthy, properly aligned spine.

At the bottom of the spine is the pelvis and sacrum. The pelvis consists of six bones, three on each side: the ilium on the front, back, and side, the pubis in the lower front, and the ischium on the bottom. 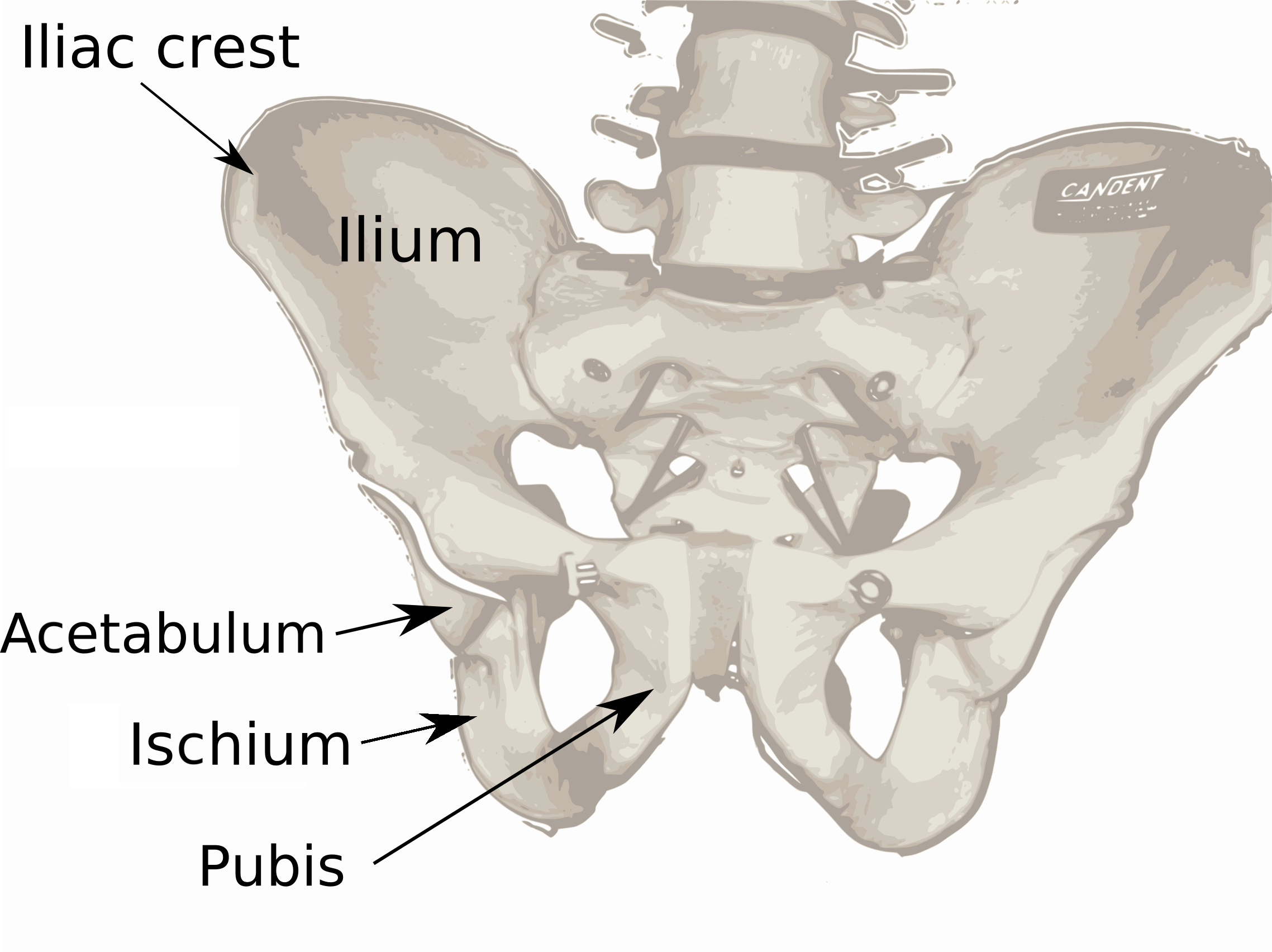 Along with the sacrum and the elaborate network of ligaments, tendons, muscles, and nerves attached and intertwined within this area, one can start to imagine the complications that can arise for a pregnant woman with an improperly aligned pelvis, one of those being a baby in a breech position late in the pregnancy.

(As a side note, having a baby in a breech position does not necessarily mean you are doomed to have an inevitable c-section, but a baby with its head down will make life a lot easier for the momma and the baby during labor.)

Because of the elaborate setup of the pelvis and sacrum, they move as one most of the time. When one ilium has rocked back into a posterior misalignment, the opposite side is, by default, rocked forward. This can cause the sacrum to tilt posterior one way or the other, often causing pain and/or tightness in the opposite leg. Because of all this tilting and torquing of the pelvic bones, the birth canal will narrow, possibly complicating the baby’s ability to birth naturally.

Any combination of misalignments of these bones will contribute to troublesome, or even severe, lower back pain for a pregnant woman, and set the stage for a painful, long labor full of interventions that may result in an eventual c-section, a major surgery few women look forward to unless absolutely necessary.

Proper chiropractic care, in and of itself, is very beneficial for the pregnant mother. A properly aligned pelvis and sacrum will do wonders in avoiding any of the unfavorable scenarios previously mentioned. Properly aligned pelvic bones help the pelvic muscles stay loose, allowing the network of nerves within the pelvic area to transmit important messages from the nervous system to their intended destinations without interference.